To deliver on this purpose, CSIRO: conducts and encourages the uptake of world-class scientific research, through its business units and future science platforms; mobilises and develop the best talent, for the benefit of Australia; and manages national research infrastructure for the nation.

CSIRO is a valued long-term partner of ACEMS. CSIRO's chief aim is to improve the economic and social performance of industry, for the benefit of the community, and ACEMS/CSIRO collaborations foster projects with this focus.

The CSIRO-ACEMS partnership remained strong in 2021, with new and ongoing research collaborations, graduating and continuing HDRs, important engagements for knowledge transfer and network building, and quality outputs, outcomes and impact. It’s also a great testimony to the partnership that both CSIRO and ACEMS members have already expressed interest and made commitments for collaborations and engagements beyond ACEMS.

A strength of the CSIRO-ACEMS collaboration is in translating frontier research for real world impact. In 2021, this has been exemplified by the application of new sequential Monte Carlo (SMC) methods/algorithms developed by ACEMS (some with collaborators), to challenging applications in collaboration with industry partners including CSIRO.

Successful applications of SMC methods in collaboration with CSIRO include:

CSIRO has supported many ACEMS HDR and student projects over the years, including by way of co-supervision, scholarships, access to data, and more. An overview of a handful of current students are below. 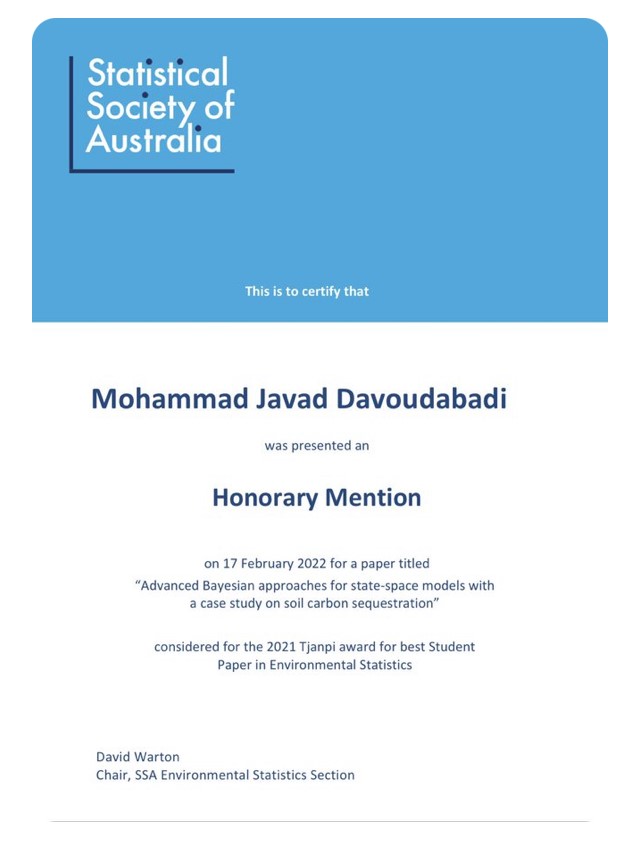 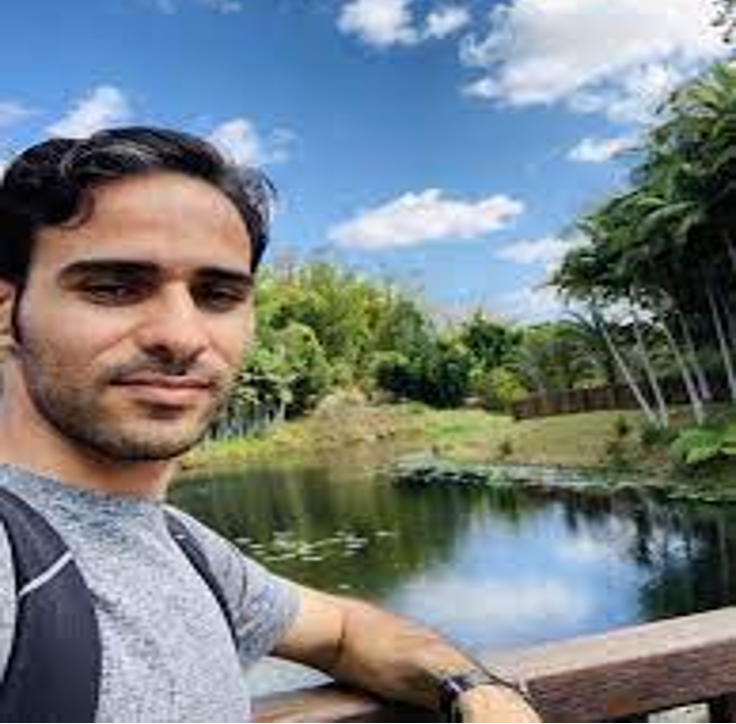 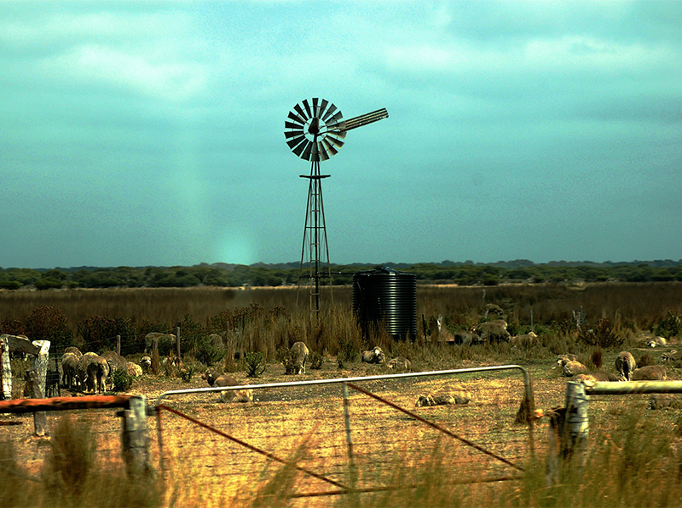 Modellers address over-fitting by simplifying their models and reducing the number of parameters. Also, employing computationally efficient methods is of great interest as this is imperative for transforming these models into useful decision support systems that allow farmers and other land managers to rapidly obtain predictions of soil carbon stocks using standard computer hardware.

The first contribution of this thesis is the development and evaluation of advanced Bayesian methods, such as the auxiliary particle filter (APF) and Rao-Blackwellised particle filters (RBPFs), for modelling soil carbon sequestration and quantifying uncertainty around predictions from complex soil carbon models. We focus on methods that can improve the speed of computation when estimating parameters in a statistically defensible way.

The second contribution of this work is related to investigating how the soil organic carbon (SOC) components and complexity of the SOC models affect the SOC prediction in the presence of small and sparse datasets. In this regard, we develop three new SOC models based on amalgamating some of the SOC components. Additionally, a new model selection method is developed to identify the soil carbon model with the best predictive performance, in light of the available data. 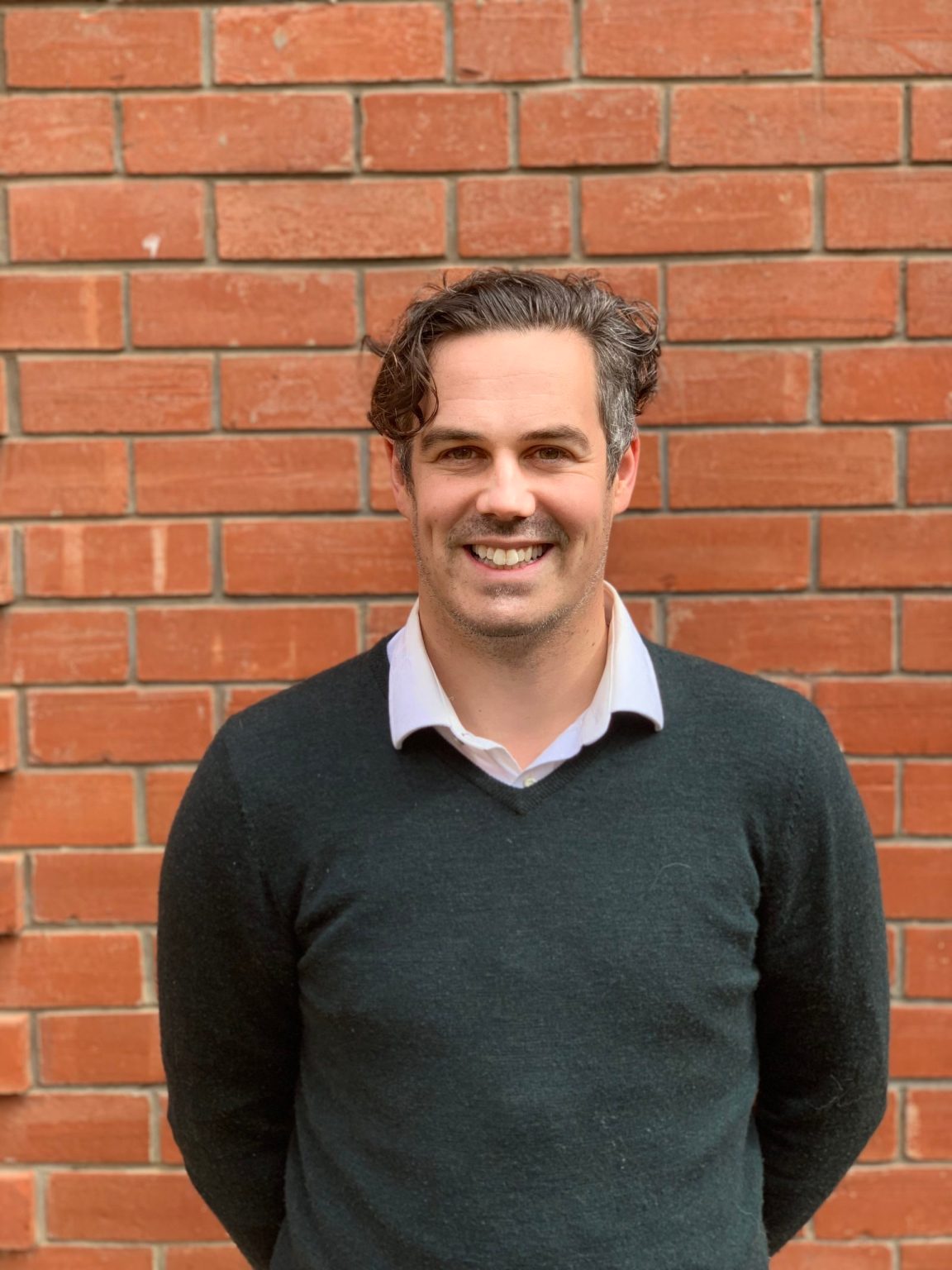 Andrew is a Data Scientist and the Team Leader of the Security Data Science group. His main research interests are applying probability theory to the security domain, which includes the modelling of the arrival vulnerabilities, modelling of the expected time until exploit of disclosed vulnerabilities and understanding attack paths through networks. Previously he worked for the Department of Defence, Australian Federal Police and Data to Decisions CRC to deliver research and proof of concept applications to assist analysts and investigators make better decisions. He has now moved to Amazon working on demand forecasting and optimisation. 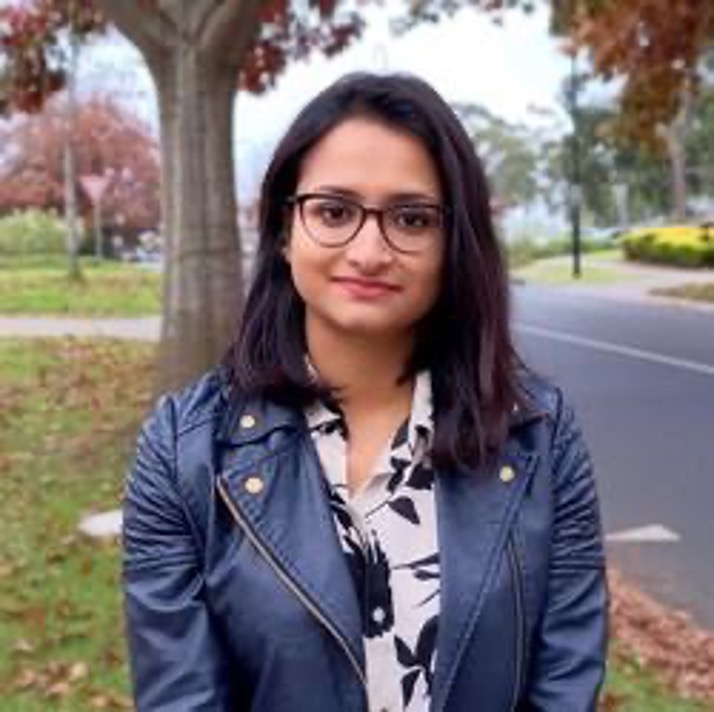 Electricity smart meter technology is increasingly being deployed in residential and commercial buildings. The technology facilitates the collection of energy usage data at much finer temporal scales than was possible previously, such as at hourly or less intervals. The introduction of smart meters affords the opportunity to better model and understand residential and business energy usage patterns between months, between days and within days, something that is not possible using only quarterly energy usage information. Using the geographical data of the households also makes it possible to identify spatial and spatio-temporal patterns. This work will concentrate on undertaking research into spatial and spatiotemporal visualisation and inferential methods for cognostics of spatially distributed big time series electricity usage data. The research activity has three main aims: 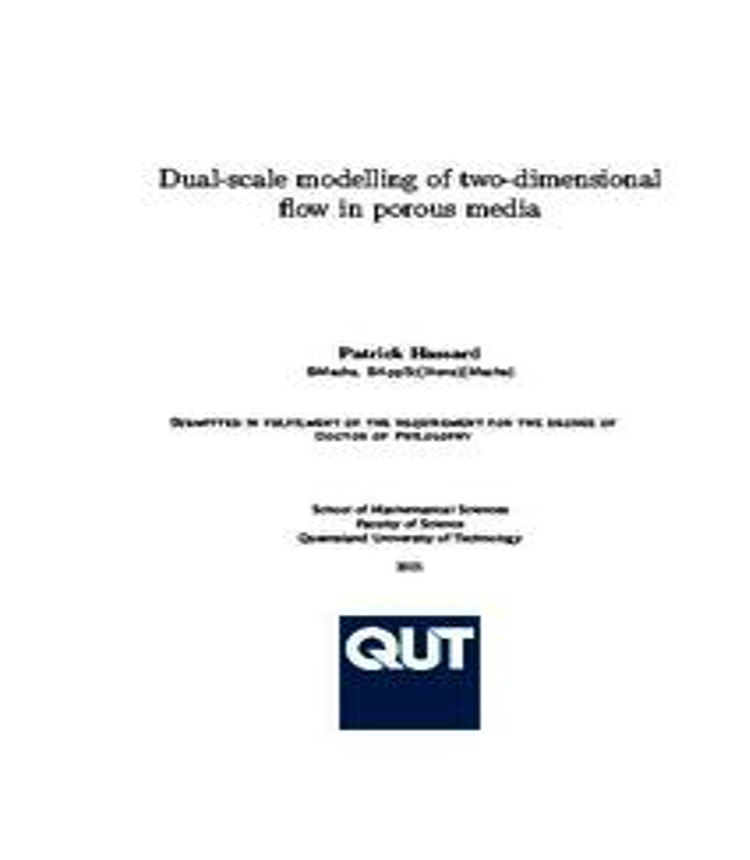 The standard approach to modelling fluid flow through a porous medium was developed decades ago, when computational resources were insufficient to feasibly simulate the flow directly. In this thesis, the feasibility of such flow simulation with modern computing power is demonstrated via the development of three accurate and efficient dual-scale models of porous media flow. An important outcome of the research is that the new dual-scale modelling framework accurately and efficiently simulates flows with a range of Reynolds numbers through a variety of heterogeneous porous media. 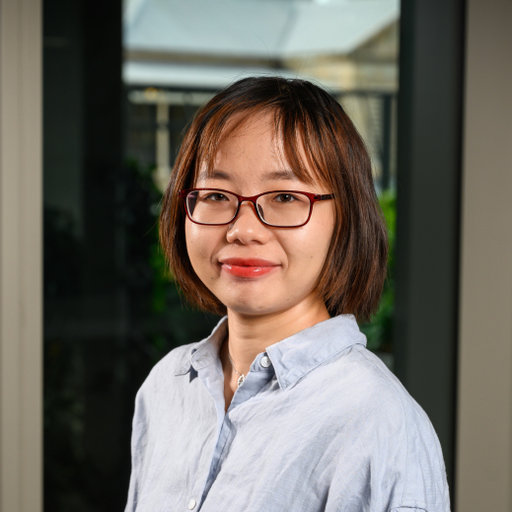 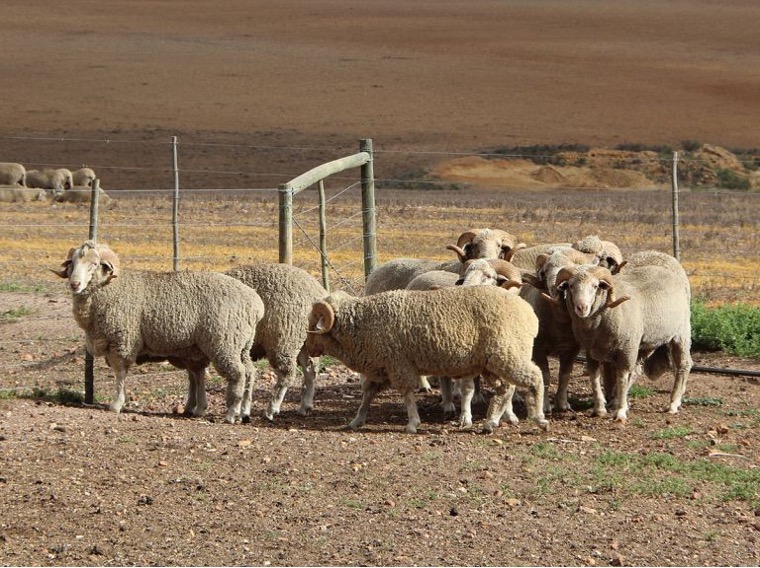 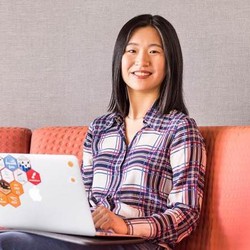 Sherry has also been contracted as a Research Assistant to work on the CSIRO-ACEMS Ideas Challenge project on wind observation data.

As well as ongoing collaborations with co-supervised students, ACEMS and CSIRO/Data61 researchers will continue to collaborate in cross-disciplinary teams in 2021 and beyond. Details of some exemplar projects, each supported by a co-funded and co-located postdoctoral researcher, are shown below.

Each of these project ideas presented promising opportunities for collaboration with CSIRO and ACEMS researchers.

This project aims to harness crowd-sourced wind observation data, including to help forecasts and responses to extreme weather events including bushfires, and help harness expertise from all collaborators.

The importance of this research is highlighted in collaborative research by ACEMS AI Kate Saunders “Research quantifying the attribution of climate change to Australian bushfire risk” which was cited in the “state of the Climate Report” co-authored by CSIRO and BOM. In 2021, it was featured in at least three policy documents:

Read more about this in the Research Theme - Informed Decisions report. 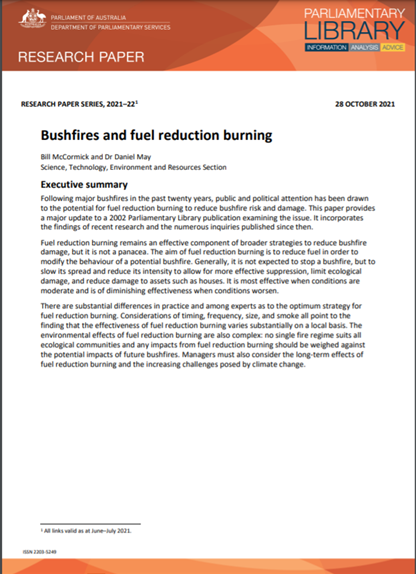 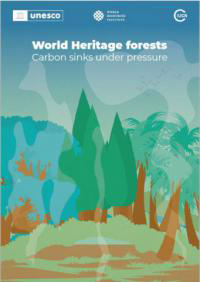 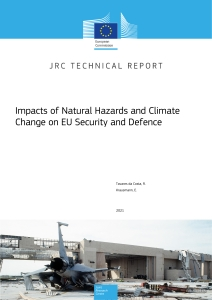 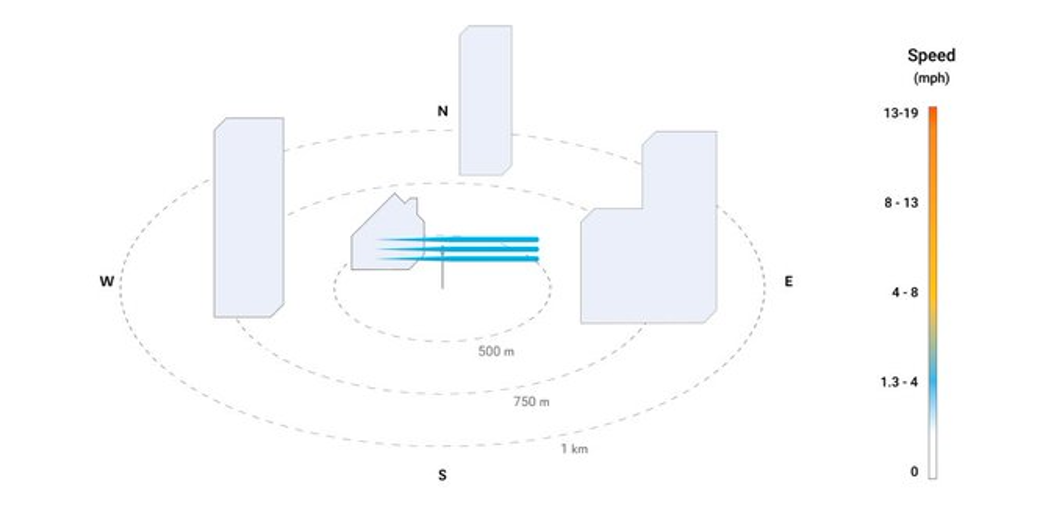 Learn more about the International collaboration here and the case study on Kate’s research.

Citizen weather stations (CWSs) could help build better weather models for Australia too - if we can first address statistical challenges and adapt the method for the distinct Australian climate and topology.

A statistical challenge is improving trust in the data quality of crowd-sourced wind observations, which has heretofore prevented the use of these observations in studies of meteorology and climate. CSIRO’s partner investigators for this project are Carolyn Huston and Dr Petra Kuhnert. See here for more information about the project.

This project aims to:

Description of the research project:

Statistical Challenges to Address in Project

Adaptation of Method and Research for the Australian Climate and Topography

In 2021, the CSIRO-ACEMS team formed and, despite COVID-19 disruptions, made significant progress. This has included:

The citizen/amateur wind data collected, and treated with statistical tools these collaborators create, can be used for many different applications - including weather, bushfire, environmental and other applications.

Further, these research collaborators aim to use springboard from this pilot project, to secure other funding. 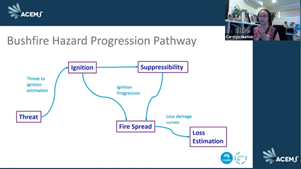 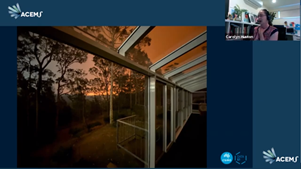 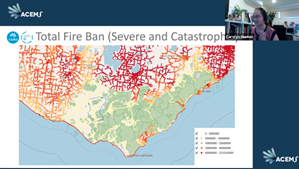 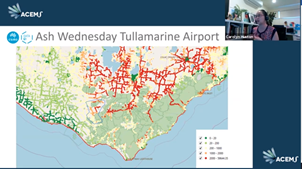 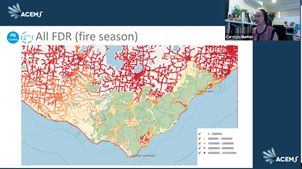 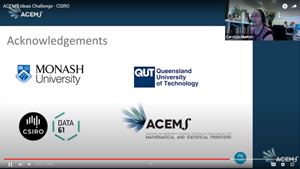 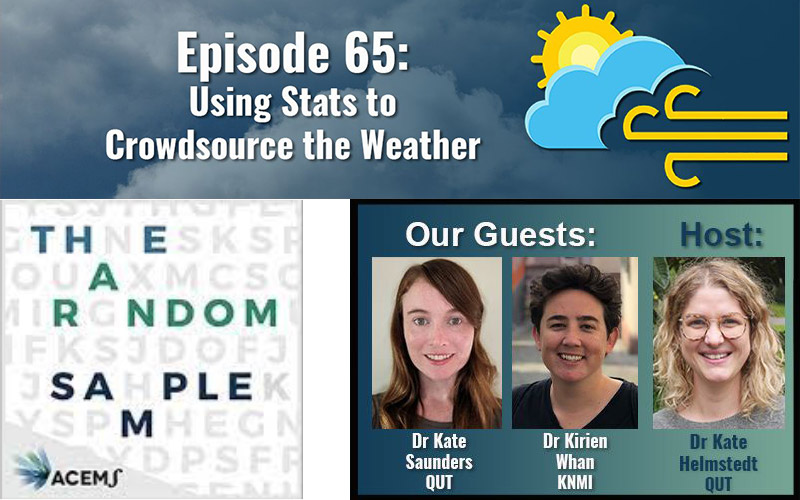 RiskLab collaborator ACEMS CI Rob Hyndman was elected a Fellow of the Australian Academy of Science in 2021, recognising his distinguished contribution in the field of forecasting, which has benefited the CSIRO RiskLab collaboration.

Use of CSIRO-ACEMS Software for Antarctica Conservation Research

ACEMS is using the R2VR software (an earlier output of ACEMS-CSIRO collaborators), for a research project “Virtual Antarctica: Quantifying Aesthetic Values of the Antarctic Peninsula” (see the Challenging Data Theme Report for more information). This research seeks to explore the definition of aesthetics used with respect to conservation in Antarctica. Immersive experiments were performed in 2021 using the R2VR web-based framework (https://github.com/ACEMS/r2vr) which allows researchers to perform Virtual Reality experiments. A Bayesian hierarchical model was then developed to estimate Antarctica’s aesthetic attributes using answers from the virtual interviews. This model accounts for uncertainties associated in people’s responses and prior scientific knowledge on Antarctica conservation values. The aim of this preliminary exploration is to integrate this knowledge into broader strategies of conservation. Understanding of aesthetic attributes in Antarctica can be applied to other regions, especially through the implementation of similar surveys and models.

CSIRO has generously engaged with ACEMS for a diversity of purposes, including mutually beneficial knowledge exchange, supporting industry, and the mentoring and professional development of ACEMS students and early- and mid- career researchers. 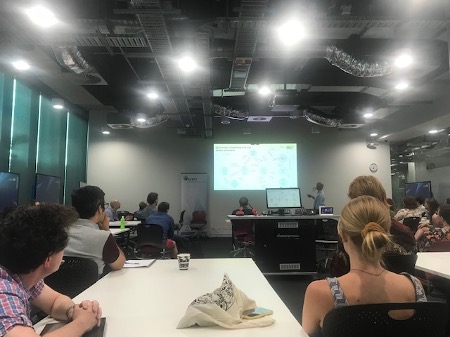 “Environmental modelling for better predictions and decisions” symposium session with industry, HDRs and researchers across Queensland, including from CSIRO.

“Frontier and future direction of data science” for which new methodologies need to be developed; ranging from learning structure from data, to learning probabilistic physical models from data, from the challenge of small data to the challenge of massive data at different scales, from adaptive sampling to adaptive reinforcement learning. These data science challenges are motivated by three real challenges facing Australia; the stewardship of our natural resources, the improvement of societal health and the competitiveness of our Industries. Operating at this nexus of methodology and application is the future of data science and is driving the formation of a new discipline. 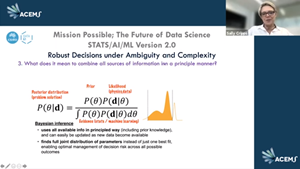 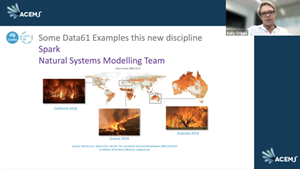 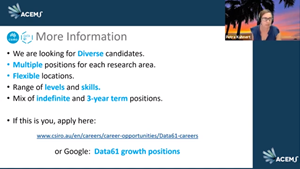 Our Partner Investigator and Collaborators

Over the years, at least 79 CSIRO researchers have engaged and collaborated in informal knowledge transfer through to formal collaborations with at least 82 ACEMS researchers and students.

We thank Petra Kuhnert for her immense contribution to the CSIRO-ACEMS partnership, including her support of and participation in engagements and collaborations, since commencing as CSIRO’s PI in 2019. Petra took on the role from Tomasz Bednarz who remains a valued collaborator of ACEMS in his roles at CSIRO Data61 leading the Visual Analytics team, in Software & Computational Systems research program and as a Director at the Expanded Perception & Interaction Centre (EPICentre) UNSW Art & Design. 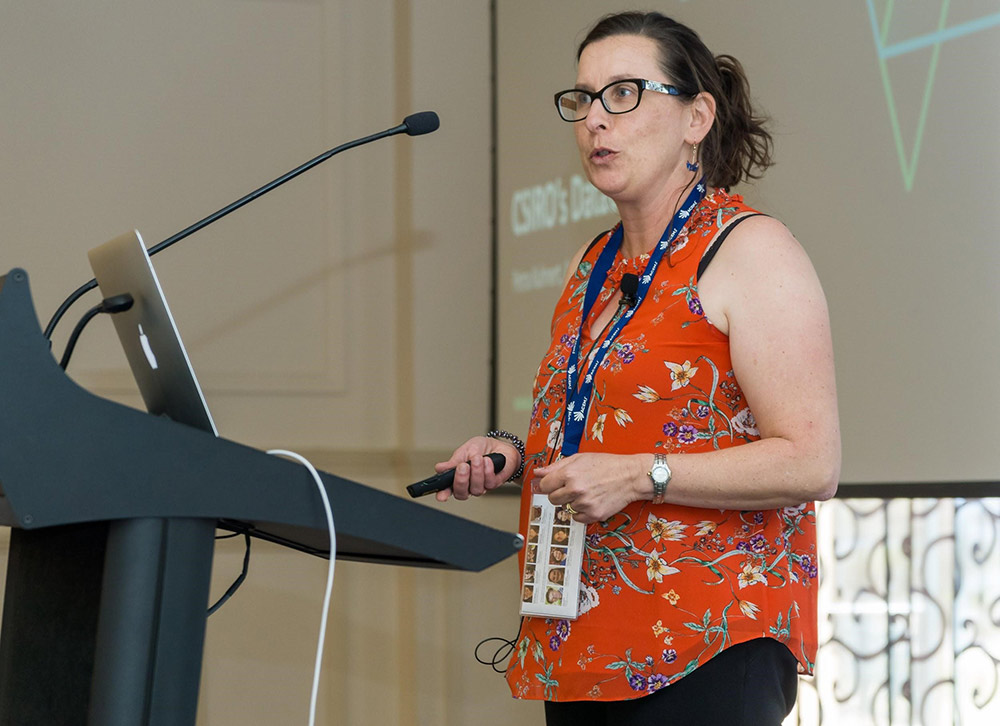 Petra Kuhnert at her first ACEMS Retreat as PI

Petra Kuhnert is a Research Statistician in Data61. Her most recent research interests are focused on managing model uncertainty and its communication for decision making. She is the Activity Leader for the Hybrid Model Prediction Activity in the newly formed Machine Learning Artificial Intelligence Future Science Platform in CSIRO. Petra is interested in novel approaches for integrating statistics with machine learning. She has authored more than 40 publications in high-ranking applied journals and was an associate editor of Environmetrics (2013-14). She is the recipient of the 2010 CSIRO Julius Award and the 2013 Abdel El-Shaarawi Young Investigator Award, for interdisciplinary collaboration and impact.