ANZIAM stands for Australia and New Zealand Industrial and Applied Mathematics, which is a division of the Australian Mathematical Society. For Lewis, winning an award from ANZIAM has special meaning.

"ANZIAM has been my primary academic community in Australia since I first attended their conference as an Honours student at the University of Wollongong. It is my favourite conference, precisely because of that community,” says Lewis.

Lewis is a Chief Investigator with ACEMS at The University of Adelaide.

“The award is also a recognition of the amazing group of collaborators I work with, both in Australia and internationally. In particular, at the moment, any success I have is largely driven by the great group of students and postdocs I work with,” says Lewis.

Alex is a PhD Candidate with ACEMS at QUT. He shared the 2021 TM Cherry Prize with Rahil Valani from Monash University. The title of Alex’s talk was “Identifying density-dependent interactions in collective cell behaviour”. He says the research for his presentation actually originated from a question asked at a previous ANZIAM Conference.

“One of the most enjoyable aspects of research is sharing and discussing it with other like-minded academics. It is an honour and an encouragement to receive a joint award for giving one of the best talks this year,” says Alex.

ANZIAM held the 2021 Conference virtually. Both Lewis and Alex say they got a lot out of it.

“The organisers did a fantastic job bringing us together on a platform that allowed for some of the social interaction and sense of community of a normal conference. There were plenty of fantastic talks by students and academics, and the online format made it easier to read more into the research of talks that interested me,” says Alex.

“The online platform allowed us to walk between conference ‘rooms’ and bump into people in the virtual lobby. The organisers put a lot of thought into how to recreate these social activities. It was incredibly impressive. I can’t overstate that,” says Lewis.

The annual ANZIAM Conference is designed to promote all areas of applied and industrial mathematics. That includes the emerging field of Data Science. Lewis says his award is proof of that.

As Alex works to complete his PhD, he knows he has already found a home in the ANZIAM community.

“It has been great to get to know the people in this community these past few years. It has helped me already build some lasting connections with other researchers and put my research into perspective,” says Alex.

This is the second straight year an ACEMS student has won the TM Cherry Prize. In 2020, it was awarded to Rose Crocker from The University of Adelaide. 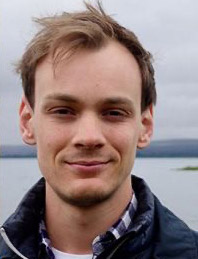