In 2021, the Statistical Society of Australia awarded Professor Rob Hyndman its highest honour, the Pitman Medal. 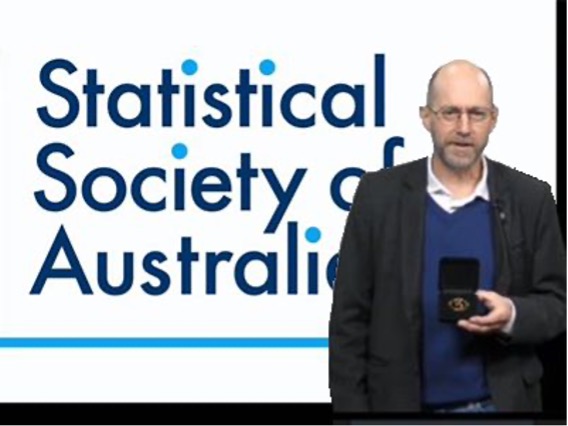 Rob is head of the Department of Econometrics and Business Statistics at Monash University and an ACEMS Chief Investigator.

“The Statistical Society of Australia was the first professional body I joined, and I have been a member for my whole career. So, to receive this prize from my fellow statisticians means a lot to me,” says Rob.

Named after Australian E.J.G. Pitman, the Medal recognises outstanding achievements and contributions to the discipline of statistics.

Rob is best known for his work on forecasting. For years, Rob has helped companies and government agencies worldwide forecast things like product sales, energy usage, and tourism. For over a year now, he has also worked with the panel advising the Australian Government to forecast the pandemic.

"Statistics provides a way of thinking about the world and a way to understand uncertainty, and I love being able to apply a statistical lens to many different problems. I have the most fun when analysing a new data set and finding that I need to develop some new statistical tools to be able to better understand what is going on," says Rob.

The Pitman Medal was Rob's fourth significant honour in a span of just nine months. Both the Australian Academy of Science and the Academy of Social Sciences in Australia elected Rob as a Fellow. The International Institute of Forecasters also elected him as a Fellow.

The Statistical Society awarded Rob the Pitman Medal at the Australian and New Zealand Statistical Conference, held virtually in 2021.

“I had a great week attending the Australian and New Zealand Statistics Conference. Even though we could not meet in person, it was nice to see what everyone has been up to recently and see innovation and creativity in tackling new statistical challenges. I did manage to meet up face-to-face with some conference attendees at the local Victorian hub dinner, which was wonderful after the long periods where we have not been able to do that,” says Rob.